The German Academy for Renewable Energy and Environmental Technology develops and organises training programmes on the topics of sustainability, renewable energy sources, water management and environmental technology. It qualifies skilled personnel for the labour market demands in a green economy and provides them with improved career opportunities.

The seminars, workshops, conferences, courses and training programmes run over one to three weeks, depending on the topic and target group. They are tailored to meet the requirements of the respective target group and are augmented by lectures and presentations, exercises of practical relevance, business games, simulations and factory tours. The practice-oriented part includes the implementation of joint projects, such as the construction of a wind or solar farm or a biogas plant. In part, these facilities continue to be used for training purposes by partners of the German Academy.

The events are organised in co-operation with German universities and research institutions that are active in the field of renewable energy sources. The target group includes students, investors, engineers and technicians as well as policy makers and decision makers in private industry companies. The Deutsche Gesellschaft für Internationale Zusammenarbeit (GIZ – German Society for International Co-operation) has its overseas staff trained by the German Academy.

Most international course participants come from the MENA region, Southern Europe, Latin America and Central Asia. On the basis of their newly acquired qualifications, several German Academy graduates have already been able to establish businesses in the field of renewable energy sources or have successfully implemented corresponding projects for their employers in their respective home countries Turkey, Egypt, Nigeria, Palestine, Uzbekistan, Bangladesh and Tajikistan.

Since 2012, the German Academy has also been co-operating with German Chambers of Commerce Abroad, the Cairo University and the British University in Cairo. A co-operation agreement was concluded with the Saudi Arabian company Renewable Power in 2014. These activities have contributed to an increase in the German Academy's total turnover of about 70 per cent. By now, these co-operation agreements have led to the implementation of training programmes in Egypt, Saudi Arabia, Qatar and Nigeria.

In 2013, for instance, the German Academy trained employees of the company Avenam Links International in the Nigerian city of Lagos, which in turn provides consultancy services to customers in the field of biogas plants. The course participants were introduced to the biological and chemical basics of biogas production, gathered information on technical requirements for the construction and operation of plants, looked into the legal framework conditions and learned how to avoid hazardous situations.

In 2014, the German Academy trained employees of Al Hamad Engineering, a construction company in Qatar that is in the process of increasingly shifting its activities towards energy-efficient building. In that country, the academy presented itself also at the largest regional trade fair, the Project Qatar 2014 for "Green Technology and Construction".

It moreover plans exchange programmes for Egyptian students in the fields of electrical engineering, computer sciences and mechanical engineering. During two- to three-week courses in Germany, 40 to 60 budding professionals per year are to receive additional qualifications in the fields of renewable energy sources, environmental technology and energy efficiency.

In 2014, the German Academy was nominated an official project of the UN Decade of "Education for Sustainable Development" by the German UNESCO Commission. The German Academy advertises its services also by way of a service portfolio in the iMOVE provider database.

This sucess story was first published in the iMOVE publication Developing Skills for Employability with German Partners • 8 Success Stories from the Renewables and Cleantech Sector. The brochure was published in 2014. 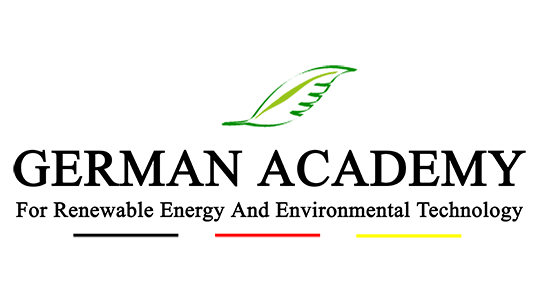